Her workplace stress was real and unrelenting and the challenging situation was increasingly impacting her life and her health. Time and energy was consumed with concerning thoughts and she longed for peace of mind. Sleep was disrupted and she craved rest and relaxation. Feelings of fear and worry were easily triggered and she wished for emotional respite. At a loss as to how to interrupt and reset, she courageously reached out for support.

We focused on calming the emotional waves, instituting strategies for cultivating sleep, and expanded ways of viewing the situation. She put practical strategies in place, sought support within the workplace, found her voice and found her footing. She negotiated the necessary adjustments and settled back into a work routine that better honoured what she needed and what she deserved.

She had won the battle, but she realized through the costly experience, that she didn’t want to stay there much longer. Although she had once aspired to move all the way up the organizational ladder, it was time to move on. As she lifted her gaze, she recognized that there were other possibilities on the horizon. She began to explore and pursue other options, confident that something would land soon.

And then it was vacation time. The trip to the west coast had been scheduled months before. While part of her was still recovering from her recent ordeal and wanted to retreat from the world, she followed through with her plans. Her adventurous friend had put an ambitious schedule in place, with biking, hiking and climbing a mountain on the itinerary. It was a stoney mountain that they set out to ascend, and the view from the base to the peak was daunting. Her friend led the way and she clambered behind. Soon her friend disappeared from view as she determinedly made her way to the pinnacle. 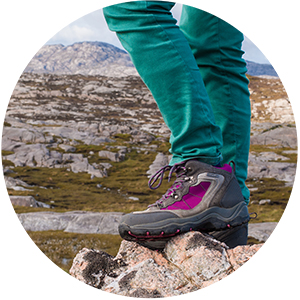 Instead of continuing to push herself to keep up with her friend’s pace, she paused, took a breath and considered what was best for her. She decided to continue her climb but let go of trying to reach for the top. Instead she adjusted her pace, and moving slowly and steadily, she put one foot in front of the other. She kept her gaze down as she carefully navigated the rocks and rubble in her path. Partway up she rested, lifted her gaze and surveyed her surroundings. The view was magnificent. She breathed it in. She acknowledged that she had gone far enough.

As she began her careful decent, she discovered that this wasn’t the only path. There were many potential routes that initially hadn’t been apparent. She moved to an easier, gentler one which allowed her to continue taking in the beauty that surrounded her as she made her way downward. She maintained a steady footing, anchored by her body and breath. A wave of peace and calm washed over her. There was much beauty on the horizon to admire.

After arriving at the mountain base and following a refreshing beverage and snack and a catch up with her friend, she checked her phone for messages. She smiled knowingly to herself. There it was, an ideal job offer.

Students may not know that research paper writers are just as with any other author;…